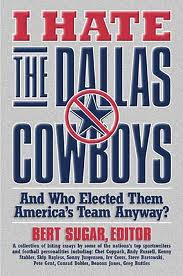 As a proud card carrying member of the 'I Hate The Arlington Cowchips Club', Houston Division, I have no love for that NFL team north of here.

My dislike of the Cowboys runs deep. It goes back to the Tom Landry 'America's Team' days and the smug faith based arrogance of its fanbase.

When I would refer to Texas Stadium as the 'Stupiddome', the Cowchip fans would counter with, "We have a hole in the roof so God can watch His favorite football team play."

Ugh. The fact they played in and won a few Super Bowls along with the irritating Cowboy fifth column inside Harris County got on mine and other Oiler fans last nerves. 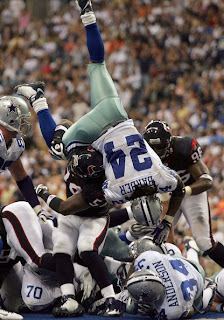 Many of my relatives on my mom's side of the family reside in the Dallas-Fort Worth Metroplex, and that only made it worse. My cousin William would never fail to pick up the phone back in the day when the Oilers and Cowboys bumped heads and remind me who was the superior NFL franchise.

I got to turn the tables on him one memorable Thanksgiving Day 1979. Earl Campbell ran through, over and around the Cowboys in Texas Stadium for 199 yards rushing and a sweet 30-24 victory.

Now that the Tennessee Traitors have moved on and been replaced by the Texans, I remind him on a regular basis that the Texans opening win as an NFL expansion team in 2002 was a nationally televised 19-10 butt kicking in Reliant Stadium.

This one is just a preseason match, but the dislike of the Cowchips is still there.

We'll get to hate on the Cowboys properly when the NFL season starts since our interconference schedule is against the NFC East division this year. That game will also be at Reliant on September 26.