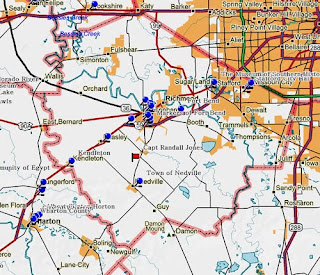 Our latest episode of Transphobic Reporter Gone Wild takes place just down the Southwest Freeway from me in Fort Bend County. It's the suburban county that's wedged up between Harris and Wharton County, where the Araguz trial is taking place.

It was also the political home base of one Thomas Dale Delay, so that gives you a clue which way the politics of Fort Bend county lean for the most part except for the easterb half of it bordering the Harris county line.

Now that I've finished with the Texas geography lesson, time to reveal the name of this 'journalist'.

John, I know you people have an AP Stylebook in the office somewhere. Why don't you find it or go to it online and review the section on respectfully reporting on trans people.

But then again, I guess asking for respect for trans people in a paper based in conservafool turf is asking a bit much, huh?
Posted by Monica Roberts at 11:00 AM