Team USA got through the exhibition part of their schedule with an unblemished 4-0 record in their games against France, Lithuania, Spain and Greece.

But now they are in Istanbul for the real deal, the 2010 FIBA World Championships and these games count.

Lamar Odom, who was a member of the 2004 USA Olympic team, said: "Our goal is to be the best defensive team in the tournament. If we do that, we’ll give ourselves a pretty good chance to win."

Team USA will play five games in six days starting w3ith their opening Group B matchup against Croatia. They have never faced Croatia in FIBA Worlds play, but have an unblemished 3-0 against them in Olympic b-ball play

But Team USA head coach Mike Krzyzewski, who has a 39-1 international coaching mark and is leading his third USA FIBA squad, isn't sleeping on Croatia. 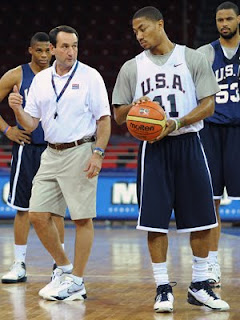 The opening game against Croatia will be a 12 Noon EDT start on ESPN3 and will be repeated at 11 PM EDT. Here's the schedule if you wish to follow the FIBA Worlds action.

So let the games begin, and may Team USA win!
Posted by Monica Roberts at 10:00 AM