Is it just me, or has 'Fear and Hatred of The Black President' made the conservafools lose their damned minds?

They were just going off the deep end this week with Dr. Laura letting her inner bigot out and whining about being 'suppressed', Rush and Beck, Caribou Barbie trying to insert herself in the controversy as usual, Newt Gingrich flapping his gums in the mosque non controversy and being wrong as usual, and Faux News taking the 'fair and balanced' hood off and handing the Republican Governors Association....

So it's Friday, and time to determine which fool, fools or group of fools distinguished themselves and earned our coveted award this week. 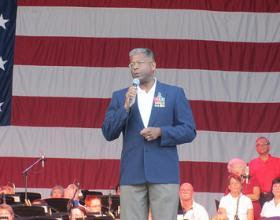 He's part of the overhyped class of 25 Oreo cookie chomping GOP candidates running for Congress this cycle who have been talking loud but so far only one of them, Tim Scott in South Carolina (it figures) has gotten out of a primary into the general election.

Allen West is the Teabagger candidate for Florida's 22nd Congressional district and is trying to prove he's more 'conservative than thou'. Video surfaced this week of him trashing Islam and people who have the 'coexist' bumper stickers on their cars at a March 8 event.

“[A]s I was driving up here today, I saw that bumper sticker that absolutely incenses me. It’s not the Obama bumper sticker. But it’s the bumper sticker that says, ‘Co-exist.’ And it has all the little religious symbols on it. And the reason why I get upset, and every time I see one of those bumper stickers, I look at the person inside that is driving. Because that person represents something that would give away our country. Would give away who we are, our rights and freedoms and liberties because they are afraid to stand up and confront that which is the antithesis, anathema of who we are. The liberties that we want to enjoy.”

Allen West, shut up fool!
Posted by Monica Roberts at 1:00 AM