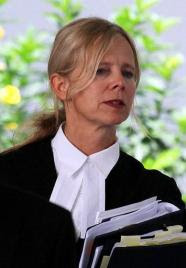 I posted about the start of a trans marriage case that could impact the Araguz one that will resume August 16.

Post operative transwoman Ms. W is suing for the right to marry her longtime boyfriend. Hong Kong Registrar of Marriages ruled last year that because her birth certificate still lists her as male, she can't despite the fact her identity card lists her as female.

The Hong Kong Marriage Ordinance says marriage can only be a union between a man and a woman. However, mainland China allows transpeople to marry.

On Tuesday Monica Carss-Frisk of Britain, the lawyer hired by the Hong Kong government to represent them in this case because they have no one locally that was familiar with how the law impacted trans people, argued that the existing law did not accommodate transgender marriage and it was up to the legislature to decide.

"If there is a desire to change attitude, then the legislature can seek to do that," she told the court.

Carss-Frisk warned that any judicial attempt to broaden or re-interpret the legal definition of "man" and "woman" would create uncertainties in the law.

Ms. W's lawyer Michael Vidler pointed out that other Asian nations such as mainland China, Singapore, Malaysia and Japan allow trans people to marry the opposite sex in their new gender.

Stay tuned, and keep praying that Ms. W wins.
Posted by Monica Roberts at 4:00 AM