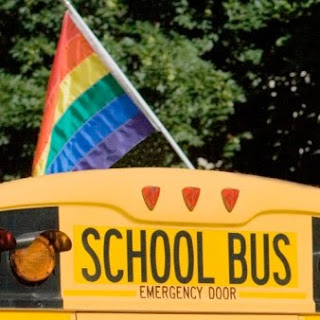 In a few hours HISD and other school districts in the Houston metro area will begin the 2010-2011 school year. I remember having mixed emotions about it.

While I was sad to have my summer vacation come to an end, on the other hand even with the drama I experienced at times during elementary and sometimes junior high, I was excited to begin a new school year and wonder who my new classmates would be.

But for many TBLG kids, the imminent start of the school year is something they dread due to harassment, bullying or other issues that crop up.

Every year we have some school district official somewhere in the nation that overreacts or has a problem with a trans student presenting in their preferred gender either at the start of the school year or during prom season.

We have other incidents that start because of people pushing their faith based hate at LGBT students. It ends up generating national news involving GLBT students with depressing regularity on many issues.

One of the pieces of new Congressional legislation I was happy to see introduced was the Student Non-Discrimination Act. It was sponsored in the Senate by Sen. Al Franken (D-MN) and in the House by Rep. Jared Polis (D-CO) and offers remedies for discrimination “based on actual or perceived sexual orientation or gender identity” in public elementary and secondary schools.

Based on what we've seen over the last few years and the recurring lawsuits that TBLG kids have had to file with the help of the ACLU and Lambda Legal just to stand up for their constitutional rights, the SNDA is sorely needed.

Here's hoping that the 2010-2011 school year is a relatively drama free one for LGBT students. Somehow, I doubt it will be.
Posted by Monica Roberts at 12:01 AM