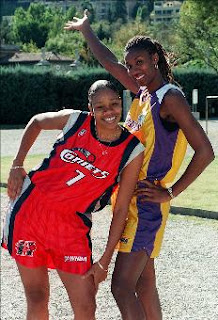 I'm still pissed at the WNBA for allowing my beloved Houston Comets to die without giving local peeps a chance to put an ownership group together to save a team that has two displays in the Basketball Hall of Fame and four consecutive WNBA titles.

But I have to take a moment to congratulate Tina Thompson for passing Lisa Leslie on August 8 to become the all time leading scorer in WNBA history.

Tina surpassed her by scoring 23 points in an 92-83 loss to the San Antonio Silver Stars in a game played in Los Angeles.

A Thompson 16-footer with 5:01 left in the third quarter gave her the all time WNBA scoring lead. 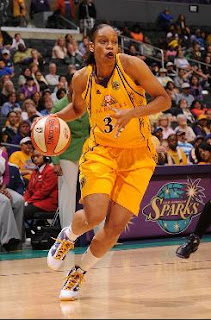 "Basketball started here in LA for me," said Thompson. "Anything I'm able to accomplish here is a pretty big deal because it's in front of my family, my friends and the people who supported me."

The people in Houston who supported you would have rather seen you break the record while wearing a Comets uniform instead of a (barf) LA Sparks one, but it's all good.

We know that four of your championship rings have Houston Comet logos on them.