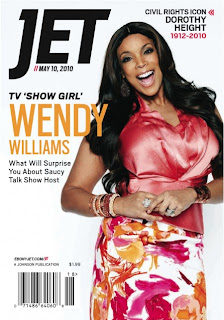 I'm not exactly a big fan of her television show, but what I hate even more is when Black women are subjected to misgendering and transphobic slurs by their detractors.

It heightens my pissivity level even more when the peeps slinging the transphobic mud share my ethnic heritage.

The latest example comes from that cesspool of homophobia and transphobia, Bossip.

They wrote a piece that talked about the cover of the May 10 issue of JET and the covers of two other magazines featuring singers Trina and Leona Lewis.

The one that got them talking was the picture of the self proclaimed 'Queen of All Media'. Since Wendy Joan Williams is 5'11" without her heels and she's generated some controversy over the years on her radio show, that has been used as an entree for attacks on her gender ID and presentation.

And now, for your viewing displeasure, some of the gems from the post's comment thread. 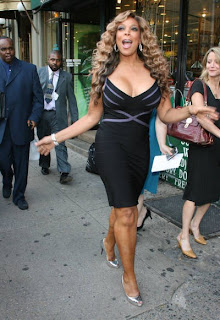 Delight23 4/30/10, 03:36:PM
uuuuggggghhh. Dorothy Height, as a civil rights icon and top story, was a better look. I refuse to believe that there are ovaries floating around in that thing.

We "Blacks" Are The REAL Hebrew Israelites 4/30/10, 03:49:PM
Whew…her face is SKRONG. Not even strong..but SKRONG.
Look at those neck muscles bulging. She has a neck like a linebacker from holding up all that Tibetan Yak hair.

Mizz Frost 4/30/10, 04:55:PM
@Delight23
“I refuse to believe that there are ovaries floating around in that thing.”
OMG!! LMAO! ahh snap! I was watching her show the other day and my roomate REFUSED to believe that she is a woman, shes all like “HEll NO THATS GOTTA BE A MAN!” She looks like she belongs on a Jerry Springer show… 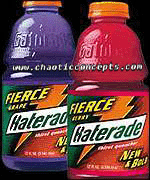 karen 4/30/10, 05:06:PM
“im not trying to be mean but this woman should consider getting plasic sergery. im sure it will do” wonders for her face… nothing too crazy just a nose job and a face lift… LOL

No. She should consider getting her pen*s and balls removed and boost her female hormones. This post opt tranny appeal is not working for her/him/shim.

RedboneKillBill 4/30/10, 07:04:PM
FLATLINED @ the title!
I almost fell out of my chair laughing so dang on hard.
They airbrushed the mess outta shim.

STUPIDGIRLLOL 5/2/10, 02:48:AM
She’s hoping that those big diamonds will distract from her manly hands!

Finally, a voice of reason in the phobic wasteland that is the Bossip comment section. 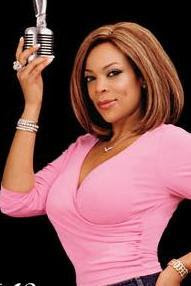 OMG! We really need to stop people. Wendy Williams is NOT a man. She is her parents (who are still married) daughter and her siblings sister. Wendy is a beautiful educated sister who had a long standing radio show and she was recently inducted into the radio hall of fame. She is a journalist, author and left radio to pursue yet another dream of hers in television. She’s witty, she’s real and she’s a BLACK WOMAN. For those who continue to call her a man or Wendell, that’s terrible and very disrespectful. GROW UP!

Grow up indeed, and pick up a fracking science book. A little more or less testo in vitro and many of the nekulturny idiots throwing shade at Ms. Williams in this Bossip comment thread could have easily been on the receiving end of the shade they are throwing.

First point I want to make is transwoman does not equal ugly NFL linebacker in a dress. Some of my transsisters are petite size 8 shoe wearing sisters next door. 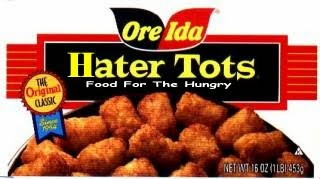 As I said back in January, and it seems like this point needs repeating until it gets through some of my peeps thick curly haired heads, I'm tired of insecure people jealous of or intimidated by confident, accomplished, and talented sisters throwing 'that's a man' shade at them.

Wendy's got more money in her bank account than all of you haters put together.

The point is that you get half your genetic material from mommy, half from daddy, and we are all blends and combinations of traits that purportedly belong to the other gender. There is also as those of us who keep up with scientific discoveries and knowledge on these issues are discovering, a fine line between being born in a masculine body and a feminine one.

And it seems like Wendy is doing just fine working the one she's got despite your unsolicited peanut gallery commentary.
Posted by Monica Roberts at 3:00 PM