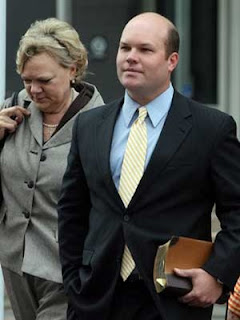 Well, better late than never, but the late Duanna Johnson has received justice in her excessive force case.

Bridges McRae, the former Memphis po-po who administered the videotaped beatdown of her at the Shelby County jail in February 2008 pleaded guilty to federal civil rights violations earlier today and agreed to a two year stint at Club Fed.

The 43 year old Johnson was later found in a North Memphis neighborhood shot dead in November 2008 in a still unsolved case.

You'll recall that earlier this year McRae was tried in federal court, but after four days of deliberations a mistrial was declared because the jury of five men and seven women could not reach a unanimous verdict.

One juror was later quoted as saying they were leaning 11-1 for a guilty verdict.

McRae was probably motivated to settle now because his case was scheduled to be retried next month and he was facing ten years in federal prison if he had been convicted on all the counts he was facing.

What probably factored into his decision as well is the knowledge that once federal prosecutors get a second crack at litigating a case, they have a 97% conviction rate.

Both sides agreed that a two year prison sentence would be appropriate, but the judge will have the final word at McRae's sentencing hearing in January.

“We came to terms we could both agree with, the defense and the prosecution, that were fair and reasonable,” defense attorney Bill Massey said after a change-of-plea hearing before US District Court Judge S. Thomas Anderson.

While we're still trying to find out who killed Duanna, her family can be comforted in the knowledge that the man who violated her civil rights will be doing time for it.

We'll find out how much time in January.
Posted by Monica Roberts at 9:00 PM