A Flag Burning I'm Down With 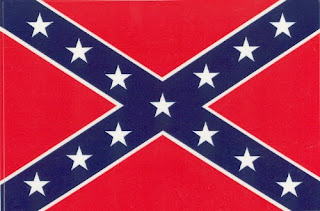 When I see my own or any national flag being burned in protest, I have mixed emotions about it.

While it is a protected form of protest speech under the First Amendment, on another level it bothers me because I know a flag is a symbol for the nation that it represents.

But when it comes to the Confederate flag, it represents a failed nation founded by traitors during the Civil War. It was founded to not only perpetuate enslaving my ancestors, but with a cornerstone premise that me and my ancestors are not equal to whites and fought a war to continue enslaving people who share my African ancestry.

Thank God the Confederacy was defeated in battle. That flag also became during the Civil Rights Movement synonymous with bigotry and hate.

So yeah, this is one flag burning I am definitely down with.

A movement is popping up on FB that seeks to have happen on September 12, the day the Tea Klux Klan holds its rallies all over the country, to host Burn The Confederate Flag Day. 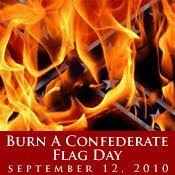 According to its website, Burn the Confederate Flag Day is a protest against the right wing's ramped up exploitation of racial prejudice for political gain.

The teabaggers are still pissed because they got their electoral butts kicked in 2008 and hate seeing the house at 1600 Pennsylvania Avenue my ancestors built with unpaid labor finally occupied by an African-American family.

It'll be interesting to see if this protest gets any traction or coverage from MSM networks overfocused on a small, loud group of angry vanilla flavored peeps.
Posted by Monica Roberts at 12:00 PM