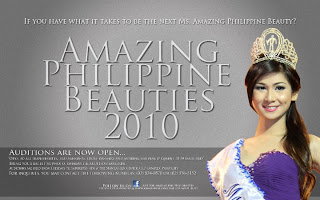 Since the inaugural event in 2003 the Amazing Philippine Beauties Pageant has rapidly built itself up into one of the world's well known trans pageants in less than ten years. Not surprising since the Philippines like Thailand has always loved beauty pageants.

The search for the successor to 2009 queen Bem Bem May Rozado began August 3 with the initial call for contestants. That group will be whittled down to the 26 finalists who will compete at the Manila Film Center for the pageant finals.

As always, I'll be keeping y'all posted and let you know when the 2010 queen has been crowned and who she is.

In the meantime enjoy the promo video for the 2010 pageant.