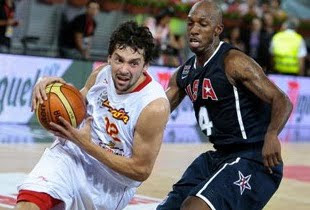 Unlike the last two games they have played against France and Lithuania, Team USA was wide awake at the start of this basketball battle with defending FIBA champion Spain at the sold out Magic Box arena in Madrid.

Team USA shot 48.5 percent from the field, had a 39-27 rebounding margin and held Spain to 41.8 percent shooting. They had four players in double figures, with Kevin Durant leading all scorers with 25 points and ten rebounds. Derrick Rose chipped in 13, Khloe's man Lamar Odom had 12 points and nine rebounds, and elder statesman Chauncey Billups contributed 10 points to the win.

Spain was led by Juan Carlos Navarro’s 20 points. Marc Gasol scored 17, with Felipe Reyes tossing in 16 from the bench.

Team USA must have thought they were in Pamplona instead of Madrid. They started fast with a 16-3 run to open the game and kept building on it through the second quarter to hold a 45-33 halftime lead on their hosts.

Spain came out of the locker room fired up. Over a five minute stretch of the third quarter they hit two three pointers and were aided by 6 of 7 free throw shooting to whittle the halftime deficit to 55-53.

Team USA woke up and went on a 8-1 run jump started by Russell Westbrook and Stephen Curry that pumped the lead back up to 63-54. Spain responded with consecutive baskets, and then Team USA responded with a 6-0 run over the final 1:04 of the quarter to take a 69-58 lead into the final stanza.

After getting whistled with three quick fouls to begin the fourth quarter, Team USA went into a defensive shell in order to avoid the bonus and putting Spain on the free throw line. Spain outscored Team USA 20-11 over the next seven minutes and finally tied the game at 80-all with 2:37 to go. 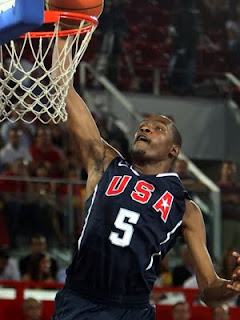 Spain finally took its first lead of the game on a Reyes layup with less than two minutes to go. Kevin Durant hit a bucket to tie the score again at 82-all and after a Rubio turnover Team USA had a chance to regain the lead. Lamar Odom's three pointer was off the mark, Spain grabbed the rebound but missed their shot to take the lead. Odom made up for his miss by grabbing a huge rebound.

With 32.99 seconds left on the game clock and seven seconds on the shot clock Derrick Rose nailed a driving bucket to give the USA the lead back at 84-82.

After a Spanish time out, Juan Carlos Navarro was fouled while scoring on a drive with 27.82 seconds left in the game. He converted the free throw to give Spain an 85-84 lead.

It was Derrick Rose to the rescue again as he shook Ricky Rubio and was fouled on his way to the basket with 16.92 seconds left. As 10,960 fans cranked up the volume Rose calmly sank both free throws.

After another Spanish time out advanced the ball to midcourt, they passed the ball around trying to get somebody open for a game winning shot.

The first attempted three pointer from Rubio was partially blocked by Kevin Durant and after a scramble for the ball Spain came up with it. Rudy Fernandez launched another three pointer that was swatted away by Durant as time expired to preserve the hard fought win.

"It was one of those games that was a learning experience for us and I think we made key plays down the stretch," Durant said. "We also played as a team and stuck through tough times."

Team USA is now 3-0 on this exhibition tour, and they'll hop a flight to Athens to train and take on Greece in their final tuneup game Wednesday. That game will be televised live on ESPN at 11 AM CDT.

If Team USA keeps playing like this, they'll shed that 'B' Team moniker quickly.
Posted by Monica Roberts at 5:01 AM