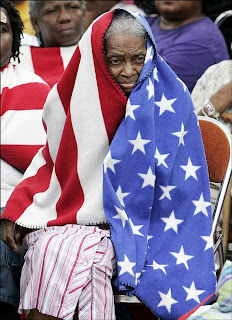 Today is the fifth anniversary of Hurricane Katina's devastating landfall in the New Orleans area.

I was pissed off when it happened then and I'm still angry about what happened to New Orleans in the wake of this disaster. And don't even get me started on Karl Rove using this tragedy for GOP political purposes.

New Orleans is one of the unique treasures of America, and it took a major blow.

It has half the population nowadays and the 2010 Census will reveal just how much population the Big Easy lost.

The aftermath of Katrina has profound social and political consequences as well. Rove went into this with the intent of turning Louisiana red and suceeded. In his zeal to do so, he may have sowed the seeds to turn Texas into a swing state thanks to all the people displaced from New Orleans who relocated to Dallas and Houston. 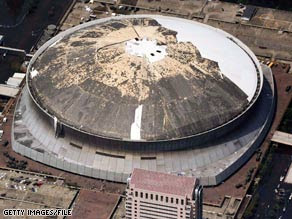 Thanks to all those New Orleans evacuees who stayed here combined with Latino population growth, our population in Houston finally surpassed 2 million. If it's confirmed by the census, it will trigger the addition of two more city council seats.

We also know another affect it had-It highlighted the GW Bush administration's gross incompetence and putting a bright media spotlight on the failure of conservapolicies. It was a factor in helping eject the GOP from federal power and giving the Dems control of Congress in 2006.

So on this fifth anniversary, let's pray for and remember the people who lost their lives during and after the storm and never forget what happened to New Orleans.
Posted by Monica Roberts at 12:00 AM