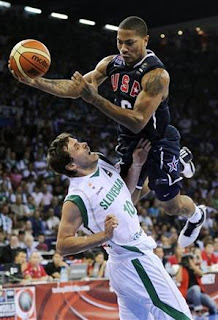 Team USA got the early Group B game this morning, and you know the old saying about the early bird. Team USA was wide awake as evidenced by Kevin Durant on Slovenia's opening possession snatching the ball away and raring in for a dunk just 20 seconds into the game and an arena filled with Slovenian fans.

Slovenia woke up, tightened up the defense and held the USA scoreless for six and a half minutes while they crept back into the game with help from sloppy USA play.

The Slovenians whittled the early deficit down to 26-23 at the 3:36 mark before Russell Westbrook jump started an 8-0 American run with his basket and an assist on Kevin Love's bucket. Love had an amazing basket during that run in which he grabbed an offensive rebound with his right arm while Uros Slokar was holding his left one, and putting it back in while being fouled. 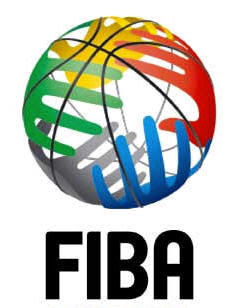 At the halftime break Team USA had a 42-28 lead and put the game out of reach in the third with another killer run. Lamar Odom and Derrick Rose hit consecutive 3 pointers to get the basketball party started to trigger another run that pushed the USA advantage to a 59-32 lead with 4:30 remaining in the period. They expanded it to a 67-46 advantage when Rudy Gay was fouled with :01 second left on the clock.

Team USA had five players in double figures led by Kevin Durant's 22 points with Rudy Gay chipping in 16. Kevin Love chipped in 10 points and 11 rebounds off the bench to move to 2-0 in Group B play with the 99-77 win.

The next game for Team USA that will be televised on ESPN at 2 PM EDT is with a Brazilian team that is missing Nene due to injury but has NBA ballers Anderson Varejao, Leandro Barbosa and Tiago Splitter.

After that Team USA gets a well deserved day off before it takes on Iran and Tunisia.
Posted by Monica Roberts at 12:01 PM