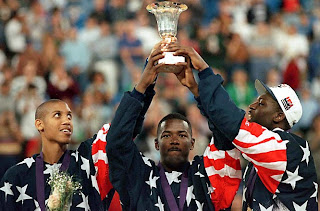 If Team USA wants to claim their first FIBA basketball championship since the 1994 Dream Team rolled though everyone on Canadian soil, they have to do a better job of getting their offense in gear when the game tips off.

The 2010 edition of Team USA may hate the derisive nickname of 'The B Team' they've been saddled with, but if they want the world's basketball respect, they better recognize that everyone's going to come at them with their 'A' game.

Team USA got off to a horrible 3 for 21 shooting start and was sloppy with the basketball as they turned the ball over six times in the first quarter. Fortunately for Team USA they only faced a 15-7 deficit at the end of the first stanza thanks to their defense and an equally sloppy opening shooting quarter by Lithuania. 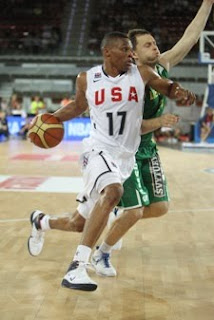 Team USA tightened up the defensive pressure and started finding the range as they clawed their way back into the game to trail at halftime 29-28.

The game was broken open thanks to a later third quarter 17-0 run triggered by Russell Westbrook and Eric Gordon. The run included four consecutive free throws after a flagrant foul and technical foul assessed to Mantas Kalnietis that gave the USA a 54-49 lead they never relinquished.

Kevin Durant shook off the rough start to score 15 points, Russell Westbrook had 12 points and Rudy Gay had 14.

Team USA faces Spain,the defending FIBA world champions tomorrow, and if they fall asleep in the first quarter of tomorrow's game, they will get their butt kicked.
Posted by Monica Roberts at 8:00 PM