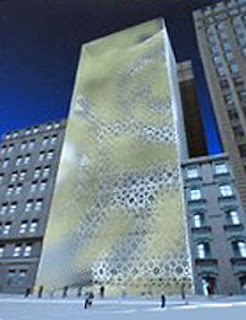 "It is my hope that the mosque will help to bring our city even closer together, and help repudiate the false and repugnant idea that the attacks of 9/11 were in any way consistent with Islam. "Muslims are as much a part of our city and our country as the people of any faith - and they are as welcome to worship in lower Manhattan as any other group." NY Mayor Michael Bloomberg.

For all the screaming the conservafools are doing about the so called Ground Zero Mosque which is actually two blocks away from the WTC site, what isn't being said or mentioned by all the haters is there are strip clubs and other sexually oriented businesses in the same two block zone near the World Trade Center site.

Interestingly enough, right across the street from the WTC on Warren Street sits the Masjid Muhammad, a mosque that has been at that spot since 1970 and gets 1000 worshipers for Friday prayers?

The bottom line is that the Constitution's First Amendment is clear on this point.

Congress shall make no law respecting an establishment of religion, or prohibiting the free exercise thereof; or abridging the freedom of speech, or of the press; or the right of the people peaceably to assemble, and to petition the Government for a redress of grievances.

'Religious freedom' is not a free pass or shield for conservafools to hate on people or groups they don't like. It means exactly what it says as a constitutional value that you can't prevent the free exercise of religion.

So when the haters show the same zeal in eradicating sexually oriented businesses like the New York Dolls strip club from the area, then and only then will I consider their arguments against the mosque and cultural center as anything other than political posturing and Islamophobia.

TransGriot Update: Keith Olbermann had a special comment on his show about this issue as well.