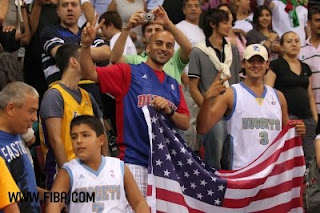 Team USA turned their first two games in FIBA worlds play into track meets. But today they were confronted by a Brazilian team in Group B that wasn't 'scurred' of them. It's also coached by former Argentinian national team head man Ruben Magnano, who has engineered two of the 7 losses that the Team USA men have suffered recently in international play.

In addition to Brazil's basketball tradition, it also has NBA ballers of their own on their FIBA squad. While Nene Hilario didn't make the team due to injury, it does have Leandro Barbosa, Tiago Splitter, and Anderson Varejao who didn't play due to an ankle injury.

They didn't need him as Brazil shot a lights out 71% in the first half thanks to some piss poor pick and roll defense by Team USA and Brazil nailing seven of 11 three pointers for a 46-43 halftine lead. 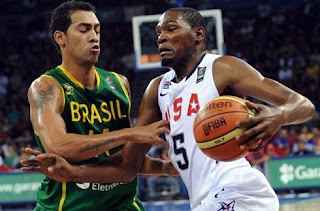 Kevin Durant kept Team USA close by being a one man 19 point wrecking crew in the first half. He dropped four treys, five of six free throws and seemed as though he was the only guy busting his butt on defense. He would finish the game with 27 points and 10 rebounds and play 39 minutes.

Team USA regrouped and came out swinging in the third quarter as they tightened up the defense and outscored Brazil 18-13 to take a narrow 61-59 lead. Splitter and Marcelo Huertas picking up their 4th fouls in the quarter didn't hurt either.

But Team USA could never get that knockout scoring run they needed to secure the game. It was a nailbiter down the stretch that came down to Marcelo Huertas having two free throws with :03 seconds in regulation time to tie it and send the game into overtime. 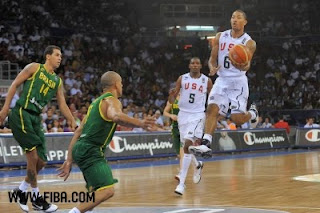 Huertas missed the first one and deliberately clanked the next one off the rim. He tracked down the rebound and whipped a pass toward Leandro Barbosa who was in the in the paint who missed the contested shot at the buzzer

Team USA now leads Group B with a 3-0 record, and after their day off takes on Iran on Thursday.

Team USA just needs either one more win against either Iran or Tunisia or a Brazil loss to clinch the number one seed and get three days off before they take on the 4th place team in Group A in the knockout rounds.
Posted by Monica Roberts at 6:00 PM