Why #teamambernicole Matters And The Silence Of White Women 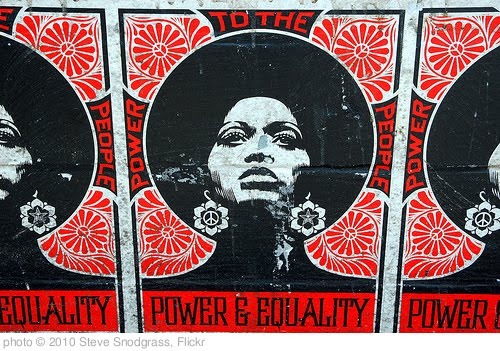 Another insightful post from Renee, my fave mommy blogger and the editrix of Womanist Musings.
Last week, I wrote about a 14 year old girl named Amber Cole, who became an internet sensation, after a video of her performing oral sex on a boy went viral.There can be no doubt that Cole's life will never be the same and we know that once something goes online, there is no way to stop it from circulating.  Every time someone views this video, Cole will be re-victimized. Thankfully, the boys involved in this incident have been arrested.

Amber only consented to performing oral sex to attempt to win back the affections of her ex-boyfriend, she most certainly did not consent to have the act filmed and released on the internet.  The boys used Cole. This tells me that Amber has a self esteem problem, and the last thing that you do when someone already has a negative self view, is to shame them into oblivion.

It would be one thing if Amber had consented within the framework of a reciprocal loving relationship, but that is not the case.  I don't really find her behaviour all that surprising, when society invests so much time teaching young Black girls that they are without value and not deserving of love.  When many heard about this incident or viewed the video, though it constituted child pornography, all they saw was a fast ass little girl and not a reflection of the way in which Black womanhood has been devalued.  Since the arrest of the boys involved, some have even gone as far as to claim that Amber should be charged with something herself, as though public shaming has not been more than enough punishment.  Amber even had to change her school, and that is only the first example of how this video will follow her through life.

When I wrote about this last week, a commenter brought up the issue of lack of coverage of the incident in the feminist sphere. I know that as bloggers, we have limited resources and we have to make careful consideration over what we bring attention to, but the glaring silence about Amber Cole is painful.  Black women have spoken up in droves to claim #teamambercole, as a method of rejecting the slut shaming and the cyber bullying involved in this incident. The silence of our supposed White female activist allies speaks loudly.

Black women have spoken out repeatedly about the various ways in which our stories differ from that of White women and this often reduced to us just being angry.  When incidents like this happen and the response from White women is silence, it simply stands as further evidence that when they advocate for women's issues, what they really mean anything that effects them and not us.  If women truly mattered, the defense of Amber Cole, would not be left solely for Black women to undertake.

Amber Cole matters because all Black women have at some point been subject to such vile exploitation.
It may not manifest in the same fashion that it did with Cole, but it is an inevitability.  To be Black and female is to be constantly under attack.  Despite the fact that Black men must negotiate racism, when it comes to gender, there is no doubt that they exist with privilege.  Despite the fact that White women must negotiate sexism in our patriarchal world, their racial privilege means that they will never experience it the way that we do, and that in and of itself is privilege - a privilege born of White supremacy.  There is not one group that completely understands the plight of the Black female and this is borne out by their lack of confrontation or defense of us when we are in need.

It doesn't matter whether the issue is Amber Cole or Michelle Obama, no one has a vested interest in truly being an ally to us, because that requires confronting privilege.  White women's organizing groups make a point of arguing against sexism, even in cases where the woman they are defending is absolutely vile.  There is never any shortage of defense for people like Sarah Palin, who is clearly anti-woman because attacking sexism aimed at her is considered necessary to fight patriarchy.  This same concept however, is not applicable to Black women, even when they are the victims of clear exploitation.

I am firmly #teamambercole because if Black women don't stand beside her and declare that cyber bullying is absolutely wrong, and that slut shaming a young girl for failing to make a wise decision is indefensible, then no one will. The only people we can reliably count on is each other. I have been told many times since I started Womanist Musings that my approach is divisive, and that I cause harm to the delicate fabric of female solidarity. If being angry at being neglected, when we are so clearly being attacked is considered divisive, then you don't really have a vested interest in women.  If you can ignore what happened to Amber Cole, and think it is okay to go about your day without defending a 14 year old girl who was used, but then defend someone like Palin, who has done nothing but harm women, then what are you doing isn't really about advocating on behalf women, but advocating on behalf of White female empowerment.

It seems to that White women want equality with White men, and far too many have decided that the best way to make that happen is to either stand directly on our shoulders, or to hand us over lock stock and barrel to patriarchy as a replacement. You're silence offers Black women up to be abused, exploited and actively oppressed in your staid.  We shall not suffer so that you can walk with freedom and we shall not be silent so that your voices and your lives constitute the entirety of the female experience. #teamambercole matters and until you can see why, we have very little to talk about.