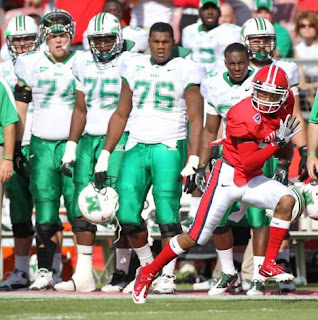 This was the first game in the 2011 NCAA season that the University of Houston Cougar footballers have played while ranked, and oh yeah did I forget to mention that it was homecoming as well?

In front of the fourth largest crowd to attend a game at Robertson Stadium the number 21 ranked Cougars scored early and often to handle their football business and maul the Marshall Thundering Herd 63-28.

Um UH, can y'all teach your pro counterparts on Kirby Drive how to close out games in the second half?   I'm just sayin'.

But back to the Cougars. Case Keenum only needed 130 yards to pass Hawaii's Tommy Chang and the become the all time NCAA offensive leader and eclipsed that record in the first quarter. 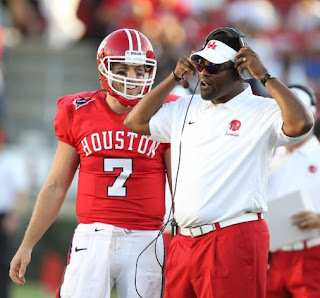 A 70 yard touchdown bomb to Patrick Edwards a mere eight seconds into the start of the game got the scoring party started to stake UH to an early 7-0 lead.   Marshall fought back to tie the score at 7-7 but UH responded with another lighting strike drive capped off by a 12 yard TD to Tyron Carrier to bump the lead to 14-7.

After the Herd scored seven seconds into the second period to once again tie the game at 14-144, the Cougars broke the game open with three unanswered touchdowns and a critical defensive stop of Marshall's Tron Martinez on a fourth and goal on the 1 yard line just before halftime that allowed the Cougars to take a 35-21 lead into the locker room.

After Marshall quarterback AJ Graham scored on a 6 yard run to narrow the gap to 35-21 early in the third quarter, the Cougars put the game away with another Keenum TD strike to Justin Johnson and a Derrick Matthews 20 yard pick six 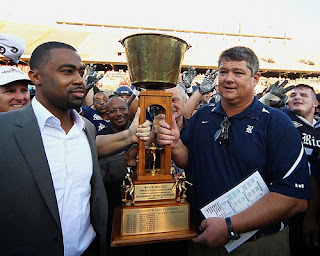 Keenum was 24 of 28 for 376 yards and six touchdown before yielding to his backup Cotton Turner who also tossed a TD pass in mopup duty.

The Cougars move to 7-0 and 3-0 in the C-USA West Division and have a short week.  They have a Thursday night Bayou Bucket showdown with our crosstown rivals Rice at the Rob and the Owl.faithful haven't let us forget who won last year's game.

You know the Owls would like nothing better than to do unto us what they did last year and ruin what is shaping up to be a very special season here on Cullen Blvd.