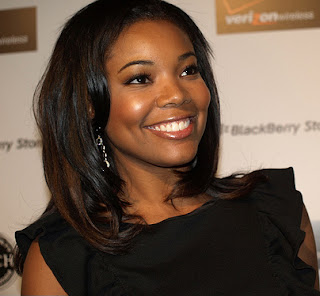 I've loved watching Gabrielle Union as the lead actress in the movie Deliver Us From Eva and first saw her in the movie Love and Basketball.

She is another one of those intelligent sisters we are blessed to have representing our people in Hollywood who from time to time will have something dead on target to say about various issues and ain't 'scurred' to talk about issues of importance to her and the community.

It's an old quote attributed to Gabrielle that I saw on Essence.com, but it speaks volumes about how much it is resonating in the Afrosphere and speaks to Hollywood's recent movie casting behavior.

“Hollywood needs to recognize all shades of African-American beauty.”

Amen, Gabrielle.  There are 23 shades of African American beauty from light and damn near white vanilla cream to deepest darkest ebony, and Hollywood needs to start focusing on the actresses who happen to be on the other end of that Black beauty scale.

Seems far too often lately that when the casting of a movie role calls for a sistah, only light bright and damned near white, mocha skinned or caramel coated sisters need apply


I love Nicole Ari Parker, Paula Patton, Thandie Newton, Meagan Good and Halle Berry for example.  They are all beautiful women and talented actresses and I enjoy watching any movie they have a part in.  However, there are sisters on the other end of the African-American beauty scale such as Gabrielle, Kerry Washington, Nia Long, Regina King, Loretta Devine, Angela Bassett, and Alfre Woodard who are just as beautiful and just as talented.

Hollywood uses all shades of brothers from Shemar Moore to Blair Underwood, Samuel L. Jackson to Idris Elba, and it's past time they start doing the same with sistahs.