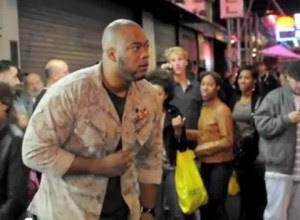 Since I criticized the Occupy Wall Street protesters in an area I believe they are lacking in, had to show them some love as well after seeing this video.

Marine Sergeant Shamar Thomas was on the scene of the OWS Times Square protests and delivered a verbal smackdown to the NYPD officers about the tactics they are using on unarmed protesters.

And miracle of miracles, the po-po's didn't trump up some phantom disorderly conduct charge to arrest him after he put them on blast.


And before you right wing conservafools start surfing over to calling this brother 'un-American' or whatever BS du jour insult you come up with to denigrate an African-American (or any African American) daring to speak their mind, this is what Sgt, Thomas had to say on his FB page about it:

I took an Oath that I live by. am NOT anti-NYPD. I am antiYou Police Brutality. I am no longer under contract with the USMC so I do NOT have to follow military uniform regulations. I DON’T affiliate myself with ANY GROUPS or POLITICAL ORG. I affiliate myself with the AMERICAN PEOPLE that’s it. I REFUSE to affiliate with anything that SEPARATES. There is an obvious problem in the country and PEACEFUL PEOPLE should be allowed to PROTEST without Brutality. I was involved in a RIOT in Rutbah, Iraq 2004 and we did NOT treat the Iraqi citizens like they are treating the unarmed civilians in our OWN Country. No one was brutalized because our mission was to ‘WIN the hearts and minds.’ why should I expect anything less in my OWN Country.