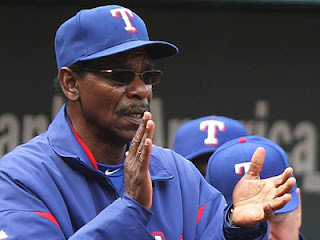 Ron Washington became the first African-American to manage the Texas Rangers in 2007, and so far he's led his team to back to back World Series appearances in 2010 and 2011.

He's not however, the first African-American baseball manager to do that.  Cito Gaston was the first and did so with the Toronto Blue Jays in 1992-1993.

Gaston's Blue Jays also won back to back titles in the process.   Dusty Baker when he managed the San Francisco Giants in 2002 became the second to take a team to a World Series but unfortunately lost to the then Anaheim Angels in seven games.  New Orleans native Ron Washington is the third African-American manager to take a team to the World series..

With the Rangers taking a 3-2 series lead into Game 6, Washington is nine innings away from becoming the second African-American manager to win a World Series, and after the foul tweet from Tony LaRussa daughter Devon about him, I'm rooting for him to do so.