Dear Slutwalk, Woman Is NOT Nigger Of The World

Renee at Womanist Musings tells it like it T-I-S is again.

Below you will find the image of a woman holding a sign at a New York Slutwalk that has led to a great deal of controversy online.  I am late to this issue but feel the need to discuss it, though it has been covered remarkably well by Latoya of Racialicious. 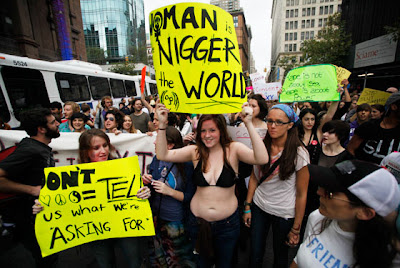 As I understand it, there has been quite a bit of controversy over this image on Facebook, as well as tumblr.  The organizers of slutwalk have released an apology that left a lot to be desired.

You may recognize that Woman is the Nigger of the World, as a reference to the John Lennon/Yoko Ono song.  It was problematic when they first performed it, and it is problematic today.  Though Ono is indeed a woman of color, she is not Black, and therefore has no basis from which to attempt to reclaim this word.  A White woman attempting to do so, is layered with a history of so much active oppression, that the racism in this sign amounts to a slap in face to all Black women who were in attendance, and have had the misfortune to come across the image online.

Unsurprisingly, it was a Black woman that asked her to take down her offensive sign. Note that she is surrounded by White women, and yet no one bothered to take offense to this.  When she was asked to remove her sign, she did immediately comply however, that does not in anyway mitigate the racism of her action.

Recently, I have attempted to have several conversations about slurs, because I believe the degree to which they are actively still in use is damaging to marginalized people.  Unless you belong to the group which the slur has historically been aimed at, you cannot reclaim the slur.  This means no matter her intent, woman as nigger is racist.  There can be justification or explanation of her behaviour that removes the offense and in fact, the purposeful nature of her actions adds a further layer of contempt.

Woman is not now, or ever will be nigger of the world.  Nigger is a slur that applies specifically to Black people.  This saying also implies that there is a similarity of experience between White women and Black women and nothing could be further from the truth. We have not forgotten that White women wielded the whip alongside their White husbands.  Many of the gains White women have made, are specifically because the heterosexual ones have been paired with straight White men or being related to White men has given them economic advantages that have not been offered to women of colour.  When White women weren't benefiting from their interactions with White men, they were using women of color as support staff to achieve their goals.  Woman can never be a monolithic identity.

Some have claimed that the woman in question did not have the benefit of learning about intersectionality and I call bullshit.  It does not take a sheep skin to know that the word nigger is unacceptable. This is beneath 101 level.  This is about the fact that equality for many White women is not about true sisterhood with women of color, but having the power to oppress in the same manner as their White male counterparts.  I think it is further important to note that there are plenty of resources from which to get a firm basis in intersectionality today.  If one is not able to attend university as I did, then there are blogs and libraries that are chock full of resources.  Ignorance today is a purposeful act.  It is privilege to decide that one does not need to educate oneself on the plight of historically marginalized people.

Finally, I would like to address the Slutwalk apology.


We regret that the woman who was carrying this sign felt it was appropriate for our space. We regret that it took so long for someone to tell her how wrong it was; and that this woman was a Black woman, a woman of colour, as we know that anti-racism is not the sole work of people of colour. We sincerely apologize for the emotional trauma this sign has evoked in everyone who has been affected by it. We apologize for not making it clearer to everyone who attended on October 1st that racist, or indeed any oppressive language or behaviour, is unacceptable. We apologize that this space was not safer for Black women, Black people, and their allies.


It is unfortunate that this young white woman’s voice has been amplified through media and all over the internet, and the voices of our intelligent, passionate speakers and MC’s, many of whom occupy marginalized identities, or are allies, continue to be ignored. In an effort to break this silence, listed at the end of this letter are the names of all our speakers, with links provided where available.

We find it saddening that three of our speakers who are trans women of colour, two of whom are Black women, are being erased from public dialogue around SWNYC. This speaks to a deeply rooted cissexism, which we are committed to interrogating. We thank all of our speakers for their passion, for challenging and empowering us.

I like to call the tactic that they employed bait and switch.  Here look over here, that is the real problem.  There can be no doubt that cissexism needs to be specifically addressed in women centered spaces.  This is especially true when it comes to feminism, which has a history of attacking or actively erasing trans women.  It was not that long ago that feminists were re-writing history to deify Mary Daly upon her passing.  Radical feminists still attack trans women whenever they get a chance and blogs that are supposedly intersectional rarely write about trans issues or have trans writers.

The outcry was about race, and to say the fact that the volume of the response is cissexist, is meant to shame and silence those who are complaining.  As terrible as cissexism is, it does not trump racism.  No ism trumps any other ism; they are all equally terrible.  I also think it is worth noting that they mention that two of the trans women who spoke were Black women.  As Black women, the racism expressed by that sign was directed at them.  You cannot separate people's identities at will to prove a point. These women did not leave their Blackness behind when they decided to transition.  They are not Black and then trans, they are Black trans women. I absolutely abhor gottcha politics.  Furthermore, why were these women not given the opportunity to address the issue personally?  I think that a Black trans woman would have an insightful nuanced commentary to add to this situation that is sorely missing in the response.  To me, the response of the slutwalk organizers smacks of othering these women.  They were used as a tool to distract from the conversation at hand, and that in and of itself is minimizing.  There are plenty of Black trans women who are extremely politically active, who they could shared  their thoughts and experiences about the ways in which race, cissexism, and sexism intersect.

I have largely stayed out of the Slutwalk debates, though I have actively read the thoughts of many women of color regarding it.  The truth of the matter is that whenever there are cis, straight White women are at the forefront of any organizing endeavor, there are going to be problems, because they have been immersed in a culture that specifically centers them.  Sexism is terrible, but it is far from the only marginalization that women face and until intersectionality becomes more than a cool buzz word, failures like this will continue to happen.  I can never again conceive of taking on the label feminist, specifically because it others my various identities, and those of women whom I love and respect.

Waiting for a Black women to complain about the sign, though it was highly visible, speaks of a collusion with the poster.  Deciding to use Black trans women as a tool to distract from racist actions is both cissexist and racist.  Stop apologizing and clean your house.  Women of color have been listening to the apologies of White women for generations, and we are now immune to the White women's tears and empty promises.