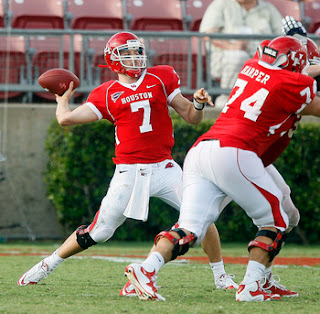 My University of Houston footballers are 6-0 for the first time since 1990, are 2-0 in the C-USA West Division and are getting a well deserved week off.

The 1973 Cougar squad also started 6-0 and only the 1979 SWC championship team and 1990 teams that started 8-0 had better pigskin season beginnings.

Even better is the news that they are already bowl eligible and the Big East is now casting glances their way as a possible expansion candidate.

They also finally got some love in the polls for the first time this season.  They debuted in the ESPN/USA Today Coaches poll at number 22 and in the AP poll at number 25. It's also the first time since the 1989-91 season that the Cougars have been ranked for three consecutive seasons.  It also means that in the four season that Coach Kevin Sumlin has been at the helm of the program, they now have been ranked in three of them with their highest ranking coming in the 2009 season when they were ranked number 12 and in position to be a BCS buster team.

Signing Coach K to that contract extension in 2010 now looks like a genius move.