Karma And Election Consequences At Work In New Hampshire?

Remember in 2008 when to great fanfare a same gender marriage bill passed in New Hampshire while a trans rights bill that was up at the same time in the Granite State barely passed in the New Hampshire House thanks to the efforts of then Speaker of the House Terie Norelli (D) and was shot down 24-0 in a female leadership dominated Senate?

Fast forward three years because the karmic wheel may be turning in this case.

An effort is underway in the GOP dominated New Hampshire House to repeal the marriage equality law and replace it with civil unions despite polling showing that 62% of people in the state oppose those efforts.   HB 437 originally banned same gender marriages and civil unions but was amended by a 3-1 vote on September 14 to allow civil unions for gay and heterosexual couples. 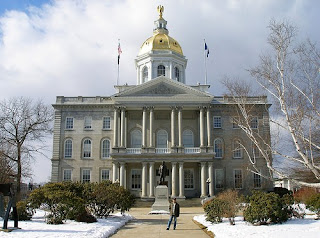 The Judiciary Committee meets tomorrow to consider a subcommittee recommendation that they repeal the same gender marriage law that took effect last year.

The amended HB 437 should it get out of committee tomorrow won't be voted on by the full New Hampshire House until the new legislative session convenes starting on January 4, 2012.

People who were married in New Hampshire won't have their marriages revoked, but should HB 437 take effect marriage would only be allowed for a man and a woman.

New Hampshire Governor John Lynch is a Democrat, so if it does pass the House and Senate, it'll be up to him to veto or sign it.   If he does veto it, the GOP might have enough votes to override it and make it law.

Elections have consequences people, and the sooner that people learn that lesson on the liberal-progressive side, the better.  Not voting is NEVER an option if you wish to not only have progresive change in society, but keep it.
Posted by Monica Roberts at 4:00 PM