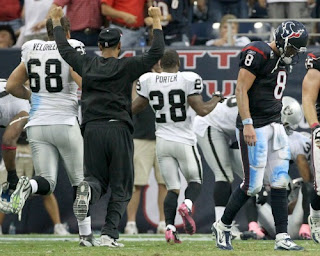 When the Texans take on the Baltimore Ravens at 3 PM CDT, we battle red, liberty white and deep steel blue wearing fans of this almost ten year old NFL franchise will be wondering which team shows up to play when the game kicks off at M&T Bank Stadium

Will it be the one that played smash mouth football with the defending AFC champion Pittsburgh Steelers and beat them or will it be the one that coughed up a fourth quarter lead to the New Orleans Saints in the Superdome or snatched defeat from the jaws of victory against the Raiders at Reliant last week?

Well, I'm betting they still won't have their act together this week but then again, seems like when we get exasperated with the Texans around here like we are right now, they find their football playing cojones.

Hope they find them today, because they play the Tennessee Traitors in an important AFC South division game next week