Ten Ways To Tell If You're In A Right Wing Church 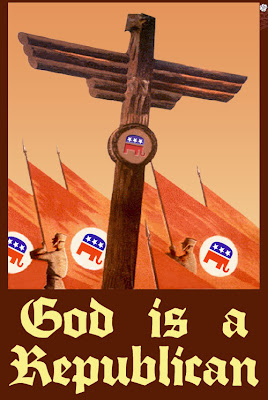 With the proliferation of megachurches sometimes insidiously pimping a right wing agenda, as a TransGriot public service, I'm going to help you sort out the cues and clues for when you are sitting in a right wing church and need to expeditiously leave the premises.

1.   The choir robes have pointed hoods.
2.   The cross over the baptismal font has burn marks on it.
3.   During the sermon they are making references to the POTUS being the Antichrist.
4.   They hand you Republican party pamphlets with the offering envelopes
5.   They rail about Mitt Romney being a member of a cult.
6.   The sermon started with 'The Apostle Paul says'.
7.   They tell you you're not a good Christian if you aren't voting for God-fearing family friendly Republicans
8    There's a gun sale in the reception hall after services
9.   They consider the Beatitudes as 'too liberal'.
10.. They have a barbecue pit for book burnings.