You have failed Emperor Palpatine (oops DeLoss Dodds) in your burnt orange mission to keep the University of Houston out of a BCS conference.

UH got that rumored invitation to formally join the Big East Conference in all sports late last night after the Big East presidents and chancellors met via conference call to discuss expansion.   AD Mack Rhoades and UH President and Chancellor Renu Khator will head to New York later this week to meet with Big East officials.

If they accept, they would join the Big East for the 2013 season.  They would not only get that coveted AQ spot in football, but it would be a major boost to the men's and women's basketball programs.  Where it would hurt would be in baseball, where C-USA is one of the strongest collegiate leagues but right now the grins over on Cullen Blvd and in Cougar Nation are as wide as Texas. 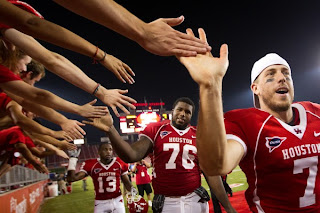 After being Left Behind during the formation of the Big XII, we're now in a better conference than the Big XII that Texas AD DeLoss Dodds was keeping us out of.   He and his bretheren in the Big XII-3+1 will pay for his lack of vision and the burnt orange flavored hateraid he was drinking when it comes to UH.

Take that Longhorn Elementary.   As the old saying goes, when you dig a grave for one, better dig one for yourself as well.

Being that the University of Houston not only has Tier One academic status and sits in the fourth largest city in the nation, the largest in Texas and the prime recruiting area for Lone Star high school talent in all sports, potential Big East membership will not only help the financial bottom line, it also helps UH tremendously in terms of recruiting.in football and especially basketball since the Big East is the premier basketball conference in the collegiate men's and women's game.

So we'll see how this conference realignment drama will play out, but for now a long sought after UH return to the stage of big time collegiate athletics is within its grasp.
Posted by Monica Roberts at 7:00 AM