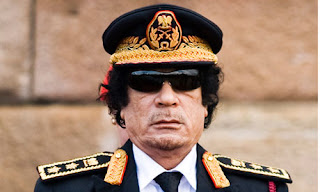 First Tripoli and Muammar Gaddafi's vaunted Bab al-Aziziya compound got overrun and sent the former Libyan dictator scurrying in haste to his hometown of Sirte to avoid capture and to set up his last stand against the surging Libyan rebel forces.

Now comes word from the Libyan government today that Sirte was finally overrun and Gaddafi was killed.

Hmm, the end of the Gaddafi regime and another foreign policy success for the Obama Administration.   Don't you conservafools just hate that, especially when it's the intelligent African-American president that's doing it and doing it well?

But hey, since the GOP will refuse to give him credit for it, I'll let the POTUS have his say on these electronic pages.


Good afternoon, everybody. Today, the government of Libya announced the death of Muammar Qaddafi. This marks the end of a long and painful chapter for the people of Libya, who now have the opportunity to determine their own destiny in a new and democratic Libya.

For four decades, the Qaddafi regime ruled the Libyan people with an iron fist. Basic human rights were denied. Innocent civilians were detained, beaten and killed. And Libya’s wealth was squandered. The enormous potential of the Libyan people was held back, and terror was used as a political weapon.
Today, we can definitively say that the Qaddafi regime has come to an end. The last major regime strongholds have fallen. The new government is consolidating the control over the country. And one of the world’s longest-serving dictators is no more.

One year ago, the notion of a free Libya seemed impossible. But then the Libyan people rose up and demanded their rights. And when Qaddafi and his forces started going city to city, town by town, to brutalize men, women and children, the world refused to stand idly by.

Faced with the potential of mass atrocities -- and a call for help from the Libyan people -- the United States and our friends and allies stopped Qaddafi’s forces in their tracks. A coalition that included the United States, NATO and Arab nations persevered through the summer to protect Libyan civilians. And meanwhile, the courageous Libyan people fought for their own future and broke the back of the regime.

So this is a momentous day in the history of Libya. The dark shadow of tyranny has been lifted. And with this enormous promise, the Libyan people now have a great responsibility -- to build an inclusive and tolerant and democratic Libya that stands as the ultimate rebuke to Qaddafi’s dictatorship. We look forward to the announcement of the country’s liberation, the quick formation of an interim government, and a stable transition to Libya’s first free and fair elections. And we call on our Libyan friends to continue to work with the international community to secure dangerous materials, and to respect the human rights of all Libyans –- including those who have been detained.

We’re under no illusions -- Libya will travel a long and winding road to full democracy. There will be difficult days ahead. But the United States, together with the international community, is committed to the Libyan people. You have won your revolution. And now, we will be a partner as you forge a future that provides dignity, freedom and opportunity.

For the region, today’s events prove once more that the rule of an iron fist inevitably comes to an end. Across the Arab world, citizens have stood up to claim their rights. Youth are delivering a powerful rebuke to dictatorship. And those leaders who try to deny their human dignity will not succeed.

For us here in the United States, we are reminded today of all those Americans that we lost at the hands of Qaddafi’s terror. Their families and friends are in our thoughts and in our prayers. We recall their bright smiles, their extraordinary lives, and their tragic deaths. We know that nothing can close the wound of their loss, but we stand together as one nation by their side.

For nearly eight months, many Americans have provided extraordinary service in support of our efforts to protect the Libyan people, and to provide them with a chance to determine their own destiny. Our skilled diplomats have helped to lead an unprecedented global response. Our brave pilots have flown in Libya’s skies, our sailors have provided support off Libya’s shores, and our leadership at NATO has helped guide our coalition. Without putting a single U.S. service member on the ground, we achieved our objectives, and our NATO mission will soon come to an end.

This comes at a time when we see the strength of American leadership across the world. We’ve taken out al Qaeda leaders, and we’ve put them on the path to defeat. We’re winding down the war in Iraq and have begun a transition in Afghanistan. And now, working in Libya with friends and allies, we’ve demonstrated what collective action can achieve in the 21st century.

Of course, above all, today belongs to the people of Libya. This is a moment for them to remember all those who suffered and were lost under Qaddafi, and look forward to the promise of a new day. And I know the American people wish the people of Libya the very best in what will be a challenging but hopeful days, weeks, months and years ahead.

Thank you, very much.

Goodbye and good riddance to Gaddafi.   Now the Libyan people can get on with the job of organizing and execuitng the post regime governmental phase complete with free and fair elections.
Posted by Monica Roberts at 10:00 PM