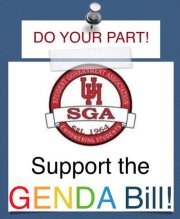 GENDA may not be able to get passed in New York State, but on the diverse campus of my alma mater it did.

The University of Houston's Student Government Association met earlier tonight in the UC's Cougar Den to consider the Gender Expression Non Discrimination Act.   Despite being named by US News and World Report as the second most diverse campus in the nation, currently the University of Houston does not provide any official protection in its non discrimination policy for its transgender students.

The UH nondiscrimination statement does have sexual orientation language.  There was an effort made in March 2008 to add 'gender identity and expression language' to it that passed unanimously at that time, but that was also two months into the start of current UH president and chancellor Renu Khator's term as the 13th president of the school.

What is called the Lopez Memo carves out a modicum of protections for trans students based on the 2008 Lopez vs River Oaks Imaging case and reaffirms the University of Houston’s commitment to upholding the same standard of discrimination protections as those outlined in Lopez.

A joint effort by former SGA senator Michael McHugh and the UH LGBT Advocates was started to amend the UH nondiscrimination policy to officially include Gender Identity and Gender Expression.   We earned that distinction as the second most diverse campus in the nation, now it's time to stand and deliver on it. 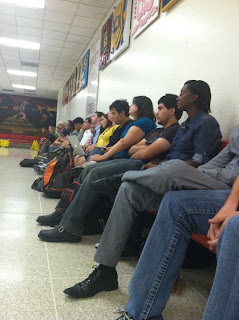 The GENDA bill in addition to having the backing of UH LGBT Advocates also had the support of the Texas Freedom Network @UH, the Student Feminist Organization, the Council of Ethnic Organizations, Global, Students for a Sensible Drug Policy, Students for Personal Responsibility and the UH College Democrats.

The meeting started at 7:30 PM and led to GENDA being approved by the SGA on a unanimous vote.

Proud of you Cougars for standing up for the trans students on campus and this trans UH alum is proud of y'all for doing so.

As was said in the Facebook announcement James Lee wrote about tonight's UH SGA meeting,


Above all, this bill is about protecting students! We call ourselves the second most diverse campus in the nation, now it's time to live up to our standard of diversity and advocate for the protection of ALL students!

Amen. I know this is only the first step in getting these protections in place but as a trans UH Cougar I want that to happen as badly as y'all do.