Alan Grayson On Why We Should All Occupy Wall Street 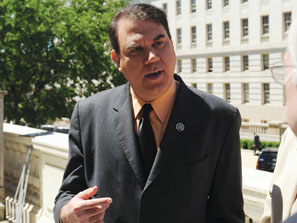 Former Rep. Alan Grayson (D-FL) given you another example why the GOP and their corporate masters spent over $10 million to get him out of that congressional seat in the 2010 midterm election..

On 'Real Time Will Bill Maher' Rep.Grayson laid the case for why the Occupy Wall Street protests around the country matter.and why the right wing er are trying to belittle, discredit or destroy tany momentum they get before it coalesces into thorow the GOP bums out anger that will express itself on November 6, 2012.