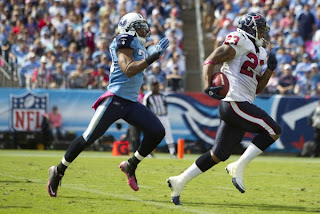 What a difference a week makes.   Last week I was griping on these electronic pages about how bad my local NFL squad stunk up the joint in Baltimore and was wondering which Texans team would show up in Nashville to play the Tennessee Traitors (oops Titans).

The Texans team that showed up in liberty white jerseys and showed out was one that rolled up 518 yards of total offense and held the Titans to 148 yards of offense.

They had Matt Schaub throw for 296 yards and two touchdowns, had two 100 yard rushers in Ben Tate and Arian Foster, held the ball for 38 minutes, had a 27-0 lead at halftime and the defense pick off two passes with one being a pick six.   This Texans team also rolled up the largest margin of victory in the history of the franchise to cap off a 41-7 rout and capture first place in the AFC South in the process. 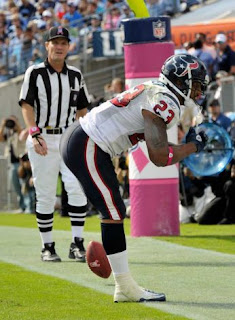 Arian Foster in addition to rushing for 115 years had 119 receiving yards courtesy of a second quarter 78 yard TD pass reception from Schaub.   He became the first Texan player to have 100 yards receiving and rushing in the same game. It was also the second time in three years the Texans have beaten the Traitors at LP Field.

There were a lot of Texans firsts and I have to give them some love for their exemplary play in this game.  It was also a very satisfying for Texan fans gridiron beatdown of one of the NFL squads we love to hate.

Take a bow Texans, pop your collars and enjoy this victory that moves you to 4-3 for the season and snaps a two game losing streak.

Now if y'all can just keep up the momentum from the successful conclusion of this pigskin business trip by winning at Reliant Stadium this coming Sunday against Jacksonville.