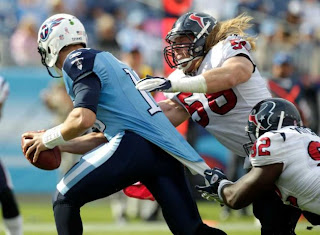 This time it's the Jacksonville Jaguars who come into Reliant Stadium on a high note after upsetting the Ravens on Monday night. The Texans are coming off a successful trip to Nashville that resulted in them beating the Tennessee Traitors 41-7.

But when it comes to the Jaguars, throw out the records.  The Jaguars are one of the few teams in the league since they entered the NFL in 2002 that the Texans have had success against in the AFC South, beating them nine times.

I'd feel a lot better with Andre Johnson on the field, but he's being held out of this game in order to give that hamstring he injured against Pittsburgh more time to heal.  To be honest I'd rather have him 100% healthy for the stretch run and the playoffs if they finally do what they need to do and make it.

The Texans have enough talent and defensive firepower where they should win this game and the next against Cleveland before they go into their bye week.  but then again I'm talking about my local NFL franchise that has a penchant for snatching defeat from the jaws of victory.

The Texans-Jaguar games have been close, down to the wire football games and it will probably be the same this Sunday.