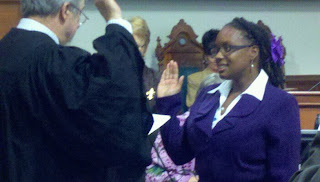 Aww yeah, got a smile as wide as Texas on this one.

Out of the 13 people who interviewed for the position, Scott and attorney Courtney Phelps were nominated to replace the expelled Dr. Judy Green.

She was elected to fill the remaining term of Green by an 18-7 Metro Council vote.
.

Councilmember Scott said in a Courier-Journal interview that she feels a need to live up to “higher expectations” in office.   Her predecessor was expelled by a unanimous Metro Council vote last month for unethical behavior and financial misappropriations.

“I’m deeply honored and humbled and I look forward to being here (Friday) morning to get to work,”Councilmember Scott said.

I'm biased because I've had the pleasure of knowing her during the time I lived there, but the Metro Council couldn't have selected a better person to fill out that remaining term.  She lives in the district and knows the issues, has 15 years experience working on social justice issues, and can and will hit the ground running in trying to solve the problems of her District 1 constituents to the best of her ability.

And yeah, hope the people of District 1 on November 6, 2012 send her back to Metro City Hall.