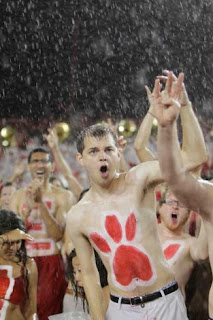 The Ruck Fice shirts were in full effect along with a raucous sellout Robertson Stadium crowd that braved rain brought in by a cold front transiting the Houston area to watch the Coogs take back the Bayou Bucket with a 73-34 victory over our crosstown rivals.

The 18th ranked Cougars are now 8-0 and 4-0 in C-USA West Division play, and matches the 1979 SWC championship squad and the 1990 team for the best in school history.

Rice put up a fight in the first quarter.   The Owls took advantage of the rain, their Wild Owl rushing attack and three Cougar first quarter turnovers to forge a 17-7 lead after Tyron Carrier took the opening kickoff and returned it 100 yards for a touchdown to tie former Clemson RB CJ Spiller's NCAA record of seven career touchdowns and take an opening 7-0 advantage before the skies opened up.

But once Case and Company got it in gear and Rice stubbornly kept trying to blitz Keenum and play the speedy Cougar receivers in man coverage, UH scored touchdowns on nine of its next 11 offensive possessions to quickly erase that 20-14 deficit and forge a 38-20 halftime lead.

With Rice lining up in a seven man front and daring the Cougars to throw deep to beat them, UH accepted the challenge and repeatedly toasted the Rice secondary like Quiznos subs.for the rest of the night. 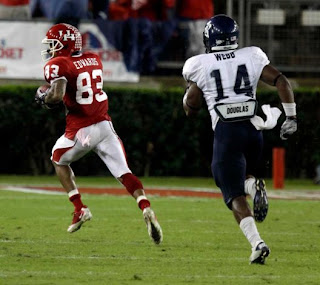 The guy doing most of the toasting was Patrick Edwards.  He caught seven passes for five touchdowns and 318 yards.  He tied Elmo Wright's UH school record with five TD receptions in one game and the career record for touchdown at 34.

Case Keenum after the shaky start was 24 of 37 for nine touchdowns and 534 years with one interception.   He also passed Graham Harrell of Texas Tech to become the all-time FBS leader in career touchdown passes with 139

Rice had a record setter in this game as well.  Owls running back Tyler Smith got loose for a 97 yard  touchdown run that broke the Rice school record for the longest one in their 100 years of playing football.

It also broke the C-USA record that was set by UH Antowain Smith in 2006 that was a mere 96 yards.

Next up for the Cougars is a road trip to Alabama to face the UAB Blazers and a trip to the Superdome to play Tulane on November 10.