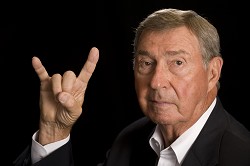 The burnt orange wearing Emperor Palpatine up in Austin, AKA Texas AD DeLoss Dodds may be about to fail in his mission of keeping UH downtrodden and out of a BCS conference.

In the process, because of the Big XII-3+1's (and Dodds) lack of vision they may be about to lose the Houston and Dallas markets in the process.

The other delicious part of this it that should this invitation come to pass, it's about to become much harder for the Longhorns to recruit the Houston and Dallas metro areas in all sports. 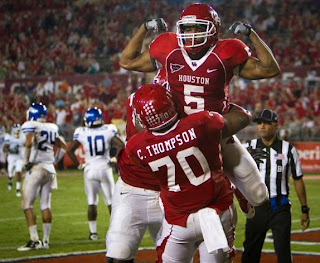 UH is not publicly commenting on it, but what we have wanted since we were unceremoniously kicked to the curb during the formation of the Big XII  in 1996 may be about to happen for UH athletics.

UH AD Mack Rhoades is quoted in the Houston Chronicle as saying,“We are aware of the growing speculation regarding conference realignment and do not feel it would be appropriate to comment on the possible intentions of another league. We are flattered to be mentioned as an athletics program of national importance and we are grateful for our strong traditions and the dedication of our fans, alumni, staff and student-athletes.”

Understand his caution, but the BCS conference that is considering your school for membership is one that also has some serious basketball chops.

The rebirth of the UH basketball program is about to take a quantum leap forward if this is true.  UH basketball coach James Dickey after only 18 months on the job is quietly putting together one of the nation’s best roundball recruiting classes .  One of the kids that will be on the roster for the 2011-12 season will be Joseph Young, son of Phi Slama Jama baller Michael Young.

The rumors are flying that the University of Houston will be extended an invitation along with Boise State, Air Force, Central Florida, Navy and SMU to join the Big East with Air Force and Boise State's invites being for football only.  A conference call has been scheduled for Monday with the Big East chancellors and school presidents to discuss expansion, although the timetable for it is still murky at this time. 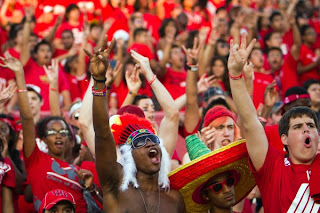 This also comes on the heels of yesterday's announcement that the Cougars current Conference USA home is setting up a 22 team football only merger with the Mountain West Conference in a bid to get AQ status for their leagues in the Bowl Championship Series.

If the Big East invite for UH is extended on Monday and is accepted by the UH administration, there's going to be a serious party on Cullen Blvd.

I'm cautiously optimistic but won't start celebrating until it's official.