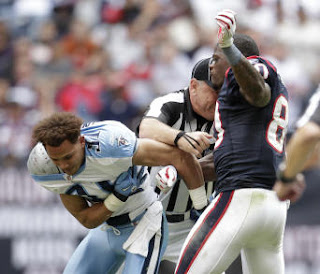 The pressure on the Texans to just win ratchets up with their upcoming visit to Nashville's LP Field to play the Tennessee Traitors (oops Titans) with first place in the division at stake.

Naw, I still ain't forgotten nor will I forgive Bud moving the Oilers to Nashville.

We now return you back to your regularly scheduled TransGriot Texans Watch post..

Next to the Arlington Cowchips and the Indianapolis Colts, this is the team that Texans fans get up for and love to loathe. As evidenced by the fight between Andre Johnson and Courtland Finnegan in last November's 20-0 Texan beatdown of the Traitors, the players on both squads don't like each other either. 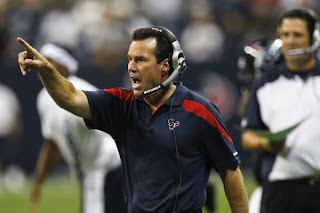 You can also bet that first year Titans coach Mike Munchak also wants a win against the Texans as badly as some guy named Kenneth Stanley Adams does.

Coach Gary Kubiak noted there may be a possibility that Andre Johnson could play in this game, which if he can after suffering a hamstring injury in the October 4 win against Pittsburgh would be welcome news.

The offense has struggled to score points in the second half since he left and they've wasted two great defensive performances against Oakland and Baltimore because of it.

Y'all know what to do Texans.  No excuses. Just win and keep on winning.

Time for me to get in 60 minute hate mode for the Traitors on Sunday.