Usually I ignore stuff from the gossip blog world unless I need to put them on blast for their transphobia (Bossip and Sandra Rose), but when it comes from the blog that broke before the mainstream media did the news that Michael Jackson had died, you have to sit up and pay attention.

According to the booking documents that TMZ.com dug up, troubled actress Lindsay Lohan who was just ordered back to jail for violating the terms of her probation, may be trans. 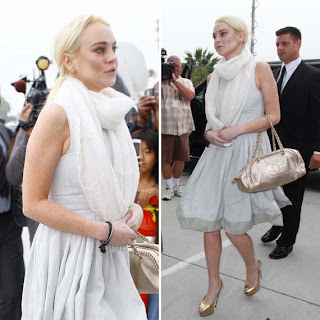 Note the big 'M' in the gender code in these booking documents.

She's facing a pissed off judge, a $100,000 bail and a November 2 probation violation hearing which could result in her spending a year and a half in the Iron Bar Hotel.

Stay tuned.   Unless this 'M' in the gender field was a coding error, she's a stealth trans person who just got outed in a very uncontrolled and embarrassing way, and it'll be interesting to see how she and her publicist handles it.

If it's true, it's another example of Hollywood being able to keep secrets better than the folks inside I-495 can.

And my rule is I assume you're a cis person until you tell me otherwise.


It also explains some of her behavior lately, which I'll offer my thoughts on once I confirm if this is true and not a coding error.