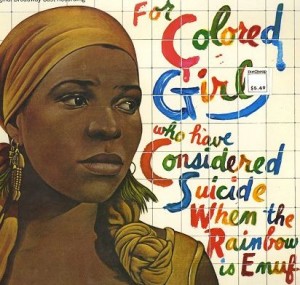 If you TransGriot readers thought I was parked in front of the television watching the Bayou Bucket clash between my beloved UH Cougars and Rice at the Rob last night, I actually was spending some time down I-45 from UH enjoying a panel discussion on the Houston Community College Southeast Campus that started at 7:15 PM CDT.

As I've mentioned to you peeps who read this blog, I'm a little better connected than some of my haters presume I am, and it turned out one of those connections played a major role into why I attended last night's event.

Two weeks ago I was watching the rebroadcast of a METRO board meeting on the local cable access HCC-TV channel.   At the bottom of the screen was a crawler message advertising some upcoming events on the various HCC campuses and the contact person and phone numbers for further information on them. .

One of the events that was advertised was a panel discussion entitled Reflections On  'For Colored Girls'- Confronting the Challenges of Race, Class and Gender in the 21st Century and was being presented by the Africana African-American Studies & The Women And Gender Studies Programs at HCC's Southeast Campus.

That campus is not too far from the house and the panel discussion was scheduled for a Thursday night so I made a mental mote as I continued to watch the METRO board meeting to consider going to the October 27 event.

I did a double take when I saw the name of the person who was the contact person for that event, a longtime friend of mine named Antrece Baggett.

Talk about small world moments.  We hadn't seen each other since 1984 and she is now the Program Director of the Africana African-American Studies & The Women and Gender Studies Programs at HCC Southeast.  It also turned out that this was also the first event she was coordinating in her new role as the director of the program.

After watching the crawler message go by a few times to ensure I jotted down the phone number correctly, I called her yesterday afternoon to make sure the program was still happening.  Once I got the business end of the call taken care of she figured out it was moi, and we picked up conversation wise as if that decade and a half had never passed.

So yeah, was definitely in the house to support my homegirl.  I got the bonus of seeing her mom again as well and being introduced to the president of HCC Southeast Dr. Irene Porcarello and the Academic Dean of HCC Southeast Dr. Pauline Warren who previously had Antrece's position.

After D.r Porcarello and Dean Warren welcomed everyone to the campus and students Brandy Rogers of HCC-Southeast and Ronica Jefferson of Texas Southern University introduced the panelists it was time to get the discussion started. 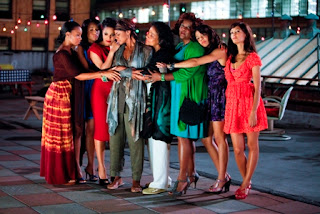 The For Colored Girls panel discussion opened with a spoken word performance of the play by Rita Hughes and another actress before moving to the four minute statements from panelists Dr. Nikita Harris of Auburn University, Dr. Rockell Brown of Texas Southern University, psychologist Dr. Valdesha Ball, MD of Baylor College of Medicine, Professor Baggett and Thecia Jenkins, the Domestic Violence advocate at 'The Bridge Over Trobled Waters .

Each panelist discussed certain themes in the movie and related it to the issues that African-American and POC women were facing in the 21st century.   Some of the issues touched on ranged from the love-hate relationship we have with Tyler Perry  to touching on the fluidity of gender and the 'unwoman' meme I've talked about here.

After taking some questions from the audience the program closed with remarks from Director Baggett and I got a chance to talk to her and Dr. Harris for a few moments before I departed for the evening.

And nope, won't be the last time I talk to Professor Baggett either.

But yeah, enjoyed getting my learn on and seeing and old friend at the same time.
Posted by Monica Roberts at 5:00 AM