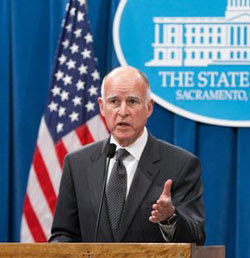 Yesterday was a historic day for transpeople in the state of California as Gov. Jerry Brown (D) signed AB 887, the Gender Nondiscrimination Act and AB 433 the Vital Statistics Modernization Act into law.

For those of you in California who weren't focused on what was happening in Sacramento, here's what those two bills do and what they do to help a transbrother and transsister out.


In a nutshell,  The Gender Nondiscrimination Act according to the San Francisco based Transgender Law Center makes 'gender identity and expression' its own protected rights category at work, at school, in housing, in public accommodations and in other settings.

AB 433, the Vital Statistics Modernization Act, makes it easier for transgender people to get a court-ordered gender change and updated birth certificate.

Very happy for you peeps in California, and hope that those laws that you enjoy get replicated elsewhere