2011 Texans Watch-Texans Treat Fans To Win Over The Jaguars 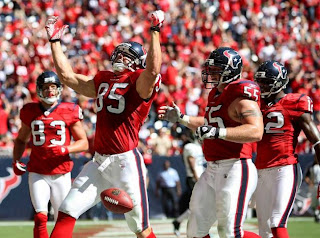 It was Battle Red Day at Reliant Stadium and battle was exactly what the Jacksonville Jaguars gave the first place Texans for most of the game.

After the Texans took the opening kickoff and marched 80 yards in 12 plays to take an early 7-0 lead after the Matt Schaub 2 yard scoring run, they had a tough time scoring for the rest of the first half. 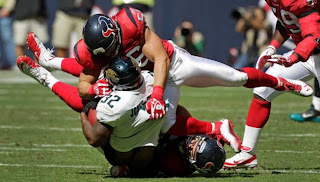 But the Texans defense stood tall for the third consecutive week and stepped up their play in this grind it out battle.  They kept the pressure on Jacksonville rookie quarterback Blaine Gabbert, sacking him once and picking off two of his passes to halt Jaguar drives.

The offense finally woke up and joined the party as the Houston NFL ballers finally took control of this game in the second half.   Arian Foster rushed 33 times for 115 yards and the Texans took another step toward their first AFC South title by forging a hard fought 24-14 victory to move to 5-2 in conference play and 3-0 for the first time in AFC South Division play.