TransGriot Note: In the interest of journalistic integrity I served on the Fairness Campaign board from 2006 until December 2007 and the secretary of C-FAIR from September 2009 until May 2010

One of the people I got to meet during my time in Da Ville was social justice activist Attica Woodson Scott.   She was in the process of running for the Jefferson County School Board when I moved and unfortunately didn't get it.

Due to District 1 councilmember Dr. Judy Green being expelled from office for ethical misconduct, that left a vacancy on Metro Council that needs to be filled.   I was happy to hear that Attica decided to submit her resume and become one of the 13 candidates to enter the race for the District 1 seat and serve the remainder of Green's unexpired term. 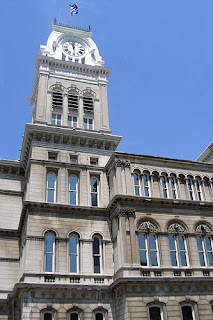 Louisville Metro Council members conducted interviews on Tuesday with the hopefuls vying for appointment to the seat which the Metro Council will select by majority vote tonight.  The person they select will have to run next year to keep the seat.so of course the Democratic controlled Metro Council will want to choose someone who not only is qualified, but has the broad based support in District 1 to win it in next November's election.


Thanks to Attica's longtime social justice work in Louisville and her previous run for the JCPS board, she has that support and was endorsed by C-FAIR, the political action committee of the Fairness Campaign.

"Ms. Scott possesses an unwavering and long-standing record of devotion to issues pertaining to organized labor and Fairness," shared C-FAIR Board Co-Chair Nick Wilkerson. "That record, paired with her clear social justice stances built upon an understanding of the inherent intersections of all forms of oppression, makes her uniquely suited to represent all Louisville's 1st District residents."


I agree, Nick.   Good luck, Attica.  Hope the Metro Council is wise enough to fill that vacant seat with you.