One of the things I was watching was the ongoing battle in Michigan's Genessee County to recall transphobic conservanegro state Rep. Paul Scott (R-Grand Blanc) from office.

In addition to earning the ire of the trans community in Michigan and beyond for his rampant transphobia, the cookie chomping knee-grow made the mistake of pissing off educators in the state.

Scott heads Michigan's House Education Committee, and pissed off teachers in the state and his 51st House district by shepherding the state cuts in K-12 funding and new taxes on pensions.  He has also been influential in pushing teacher tenure reform efforts championed by Gov. Rick Snyder (R-MI) that made it easier to fire teachers. 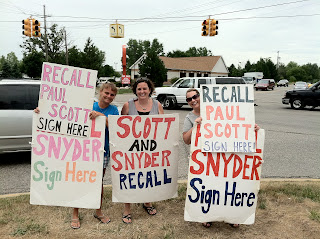 An enthusiastic recall effort spearheaded by teachers and people in the 51st District exasperated with Rep. Scott and funded by the Michigan Education Association got organized.   The Genessee County Elections Board approved the language on July 23 and the effort began to collect the 9,600 signatures required to force the recall election.

The Recall Paul Scott team collected more than 12,000 signatures in a mere two weeks and the Michigan Bureau of Elections validated 11,000 of them, putting it well over the number needed to get the recall question placed on the November 8 ballot.

Rep. Scott struck back by filing a suit to stop the recall effort in Genessee County which was denied, then he took his efforts to stop the recall to neighboring Ingham County.   A divided Michigan Court of Appeals three judge panel surprisingly issued a 2-1 vote ruling to halt the recall despite the fact that absentee ballots for it had already been sent out, their rationale being the Genessee County judge erred in not granting the injunction to Scott.

The legal fun continued to reverse that ruling and Ingham County Circuit Court Judge Clinton Canady issued an injunction on October 6 to take the Paul Scott recall off the November 8 ballot. 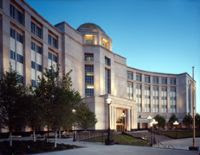 With a drop dead date of October 25 looming as to whether or not the now on legal life support recall effort could continue, another appeal by the Recall Paul Scott proponents was filed to the Michigan Supreme Court to flip the legal script and let the recall election happen.

On Wednesday their legal Hail Mary was successful when the Republican dominated Michigan Supreme Court unanimously ruled against Rep. Scott and overturned his injunction and the Court of Appeals ruling.

Ah, I love it when democracy is allowed to happen.

The recall election is back on, and Michigan voters in the 51st District will have the opportunity on November 8 to decide whether this transphobic teacher basher gets to stay in the Michigan Legislature until the 2012 election cycle or gets kicked to the curb ASAFP.

You know what outcome I'm rooting for.   Care for an Oreo, Paul?