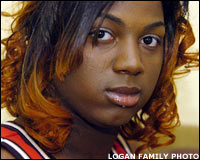 I'd written about this when it happened back in May 2006 and when the Logan vs. Gary Community School Corporation case with the help of Lambda Legal was first filed in 2007.    Logan claimed the district violated her long established First and 14th Amendment rights

This is old news since it happened back in April, and had been keeping up with the case as it moved through the US District Court.   Was curious because I hadn't heard anything on it since it proceeded to the trial phase.  I discovered what had transpired and wanted to share it with you.TransGriot readers.

To recap the events that triggered this legal saga, KK Logan had been dressing in femme attire through her junior and senior year, hadn't been bothered about it and had even discussed with the assistant principal and principal the issue.  But after spending $200 for the long pink prom dress, a manicure, a pedicure and getting hair styled was denied entrance to the prom by then West High school principal Diane Rouse.   To add insult to injury, they allowed a female student to walk into the prom venue wearing a tuxedo.

They refunded KK's $85 prom ticket money, but it was on like Donkey Kong because you only get one shot at experiencing your high school prom and the transphobic principal ruined it. .

Logan was given an undisclosed amount of money by the Gary Community School Corporation to settle the case, and hopefully no other trans student matriculating in the Gary school system will have to go through what KK did.