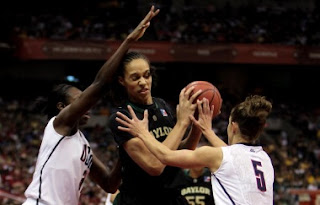 When these two teams last played each other it was on April 4 in the semifinal round of the 2010 Final Four in San Antonio's Alamodome.  Maya Moore and her UConn Huskies beat Brittney Griner and Baylor 70-50 enroute to another perfect season and back to back NCAA women's b-ball titles.


Maya spent her summer tuning up her skills and being the only collegiate player on a star studded 2010 FIBA women's World Champion USA basketball team.

Brittney Griner is more of a imposing 6' 8" question mark in terms of how much she's improved her game for her sophomore season heading into this latest women's Game of The Year. 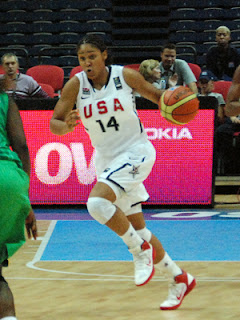 UConn is also chasing basketball history with a squad that has five freshmen.   They are not only working on a third straight perfect season,  they are seeking to pass the NCAA mark of 88 straight wins posted by the John Wooden coached UCLA men's dynasty.  When the season began they were only nine wins away from that mark and opened their season with an 117-37 win over Holy Cross.

UConn after administering that 80 point basketball beatdown has won 79 straight games and counting. 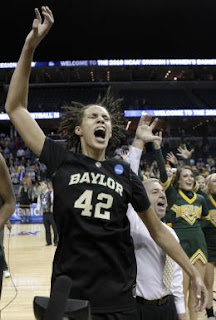 And as of yet, no thunder dunks for Brittney.

Both teams hope that in a few months they will be the ones cutting down the nets and celebrating a championship on the floor of Conseco Fieldhouse in Indianapolis in April at the 2011 Women's Final Four.   But until then, there's a lot of basketball to be played between now and then and a lot of schools that have the same dream .


It will be fun to watch this latest Number one vs Number two battle unfold on ESPN.

It'll give us women's college basketball fans an idea of just how good both teams are and give me an idea how much my Houston homegirl has improved over the summer...