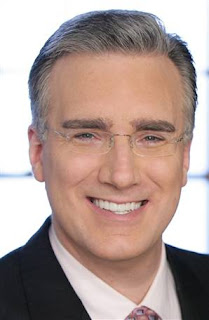 Keith Olbermann returns to MSNBC's Countdown tonight after his BS suspension without pay for three personal donations to Democratic candidates.

The outrage in liberal circle over his indefinite without pay suspension in light of the fact that Fox Pac gave $1 million to the Republican Governors Assn and relentlessly shilled for GOP candidates in this cycle led to over 3000,000 people signing an online petition to get him back on Countdown speaking truth to right-wing power and the beginning stages of a boycott against Comcast, the potential new owner of MSNNC if he wasn't.

Anyway Keith, glad to see you back on the air kicking conservafool behind and taking names.

Posted by Monica Roberts at 7:15 PM