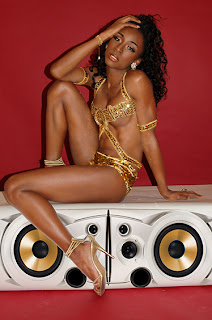 TransGriot Note: This is a guest post from the multitalented Angelica Love Ross that she wrote in response to two events.

She's commenting on the recent Michael Musto Village Voice article questioning whether 'tranny' is a slur as a wide variety of peeps across the trans universe have told you it is, and some fool disrespectfully posting the f-word on her YouTube page


(Sidenote:  Someone just recently posted "faggot" on my YouTube page, and in a separate post used it in a sentence, "you are a faggot".  To me, it's all the same. )

Shame on Gay Men who think they can speak on behalf of the trans community as well as all women in general.  It seems whether a man is  gay or straight he has strong opinions on what a woman should think, do, say, feel, and look like. ﻿

But as a black transsexual I have and I personally find both the N-word and the T-word to be disrespectful.

Can you imagine someone saying "Can you believe it? We've got a Nigga and Tranny in the WHITE HOUSE?" I could just imagine Chris Rock having a field day with that.

But if you had a chance to meet the president, would you say "What's up nigga'?" Or if you met Amanda Simpson, the first transgender official who was appointed by President Obama, would you refer to her as a Tranny? I mean just listen to it, people.


Most of my co-workers don't know I'm transgender and I hear them jokingly throwing around the word Tranny and the lovely catch phrase, "Tranny Whore".

Recently one came up to me and pointed two out who left the store and called them 'its' and 'he-she's' (not a very far leap in my book). It creates "otherness" and usually an "other" that you yourself wouldn't want to be a part of.

We love to draw imaginary lines that separate us from each other and create fearful boundaries.  The most damaging being the gender lines usually drawn to put women in their places.  Because girls don't do this, and boys don't do that. Yet somehow they still persist.

I say think of the most favorable, honorable, respectful terms you can speak of someone, and use those across the board.  Believe that everyone deserves happiness and respect, and if no one else will give it to them, you will.