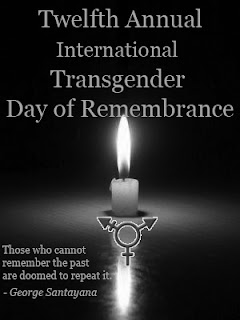 TransGriot Note:  This is the TDOR essay I wrote for Renee of Womanist Musings.


It's here.  The 12th annual International Transgender Day of Remembrance.     I can remember when it was just a great idea that Gwen Smith organized in the wake of our pissivity over Rita Hester's 1998 death and  our alarm that we were already starting to forget about the deaths of transpeople such as Debra Forte and Chanelle Pickett.that happened in 1995.

Thanks to Gwen's and Ethan St. Pierre's efforts and a cast of thousands around the world, it has grown to become an event embraced by the international trans community and our allies.

As someone who was around and part of the local and national trans leadership when the TDOR started in 1999, as time inexorably marches on I have seen eleven previous TDOR's come and go.  I have that intimate understanding of why we have them and militantly resist the calls from some transpeople to change the focus from a memorial ceremony to a happy-happy joy-joy event because it's in their words 'morbid and depressing' 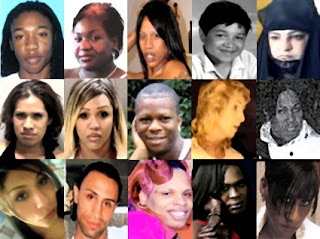 Fighting lynching and advocating for an anti-lynching law was 'morbid and depressing' for my African descended peeps as well for most of the early 20th century but they took on that grim task along with the NAACP.   Even though the bill got filibustered to death by the Dixiecrats,  they kept fighting for that goal of eliminating lynching deaths and filed that anti-lynching bill in Congress every year without fail for over 40 years.

70% of the transpeople we memorialize are people of color.  I don't want people forgetting that salient point either as we read this year's list of names..   Until anti-trans violence is reduced to nothing and the people who perpetrate it get properly punished for doing so, there will continue to be a need for the 'morbid and depressing' TDOR.

We also need to remind our allies that this is an important day for us as well.   Just as you in the GL community have certain events that you treat with reverence such as the upcoming World AIDS Day, do the same for our TDOR.

But no matter what my role is from year to year, and this year back in my hometown I'll be just one of the attendees sitting in the AD Bruce Religion Center, I never forget why I'm at whatever venue we are holding a TDOR.

One, it's to remember the people who didn't make it through the year.   Hell, Brenda Paes, one of the people on the list that we are memorializing in this year's ceremonies didn't even live to see the dawning of 2010    She was found dead in her Italian apartment on November 20, 2009, the very day we were mourning 122 transpeople who were killed last year due to anti-trans violence.

Two, it's to remind myself that there but for the grace of God go I.   If my life circumstances were different, a little bad luck or a few wrong decisions were made here or there, I could have been one of those names people are reading off the TDOR lists

Three, it's so that I as an activist never forget one of the three groups of people we are fighting to gain trans human rights for.   The trans kids, the people who are here on the planet and the trans angels whose lives were taken away from us for no other reason other than somebody had a problem with them living on Planet Earth because they are trans.

And finally, it's so I and others don't forget the names of Tyra Hunter, Ebony Whitaker, Angie Zapata, Gwen Araujo, Lateisha Green, Leslie RaJeanne Pink, Amanda Milan and the 400 plus people that are listed on the Remembering our Dead website..

The TDOR lives so that I and the international trans community and our allies never forget the trans people who died.