The champion was announced on this year's season of ABC's Dancing With The Stars and I can tell you it wasn't Bristol Palin's no dancing behind.

Jennifer Grey and her partner take the mirrored ball championship trophy home over Kyle Massey and his partner, but many peeps in the African-American community's and beyond are still pissed over Brandy's  controversial elimination last week despite having perfect scores. 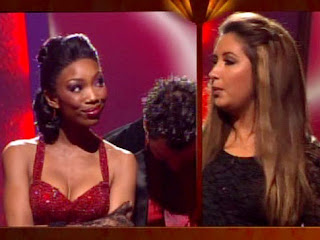 Some DWTS fans feel it's a tainted championship because of the conservashenanigans.

Just wish some of y'all Black folks beefing about Brandy had taken y'all butts to the polls November 2 and  been this fired up over the 2010 midterms, but I digress.

As long as the Spawn of Sarah wasn't holding that trophy, it's all good.
Posted by Monica Roberts at 7:00 AM