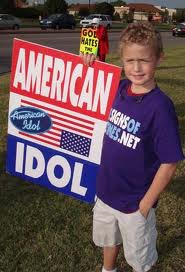 The Westboro Baptist 'Church' peeps AKA Fred Phelps and Family showed up in McAlester, OK to do another one of their reprehensible protests of military funerals.  But this one had a different result from what they're used to.

They showed up for the funeral of 26 year old Army sergeant Jason James McCluskey who was killed while serving in Afghanistan on November 4.

After being met by 1000 protestors chanting USA! USA! and motorcyclists revving up their engines every time they tried to shout their message of hate, the Phelps Phamily ended their day of exercising their First Amendment rights to hate on people and trudged back to their van to pile in for the drive back to Topeka, KS. 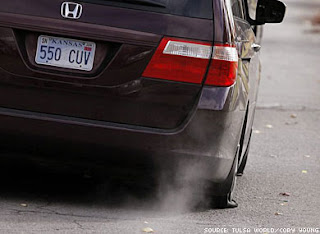 Only one problem.   They discovered when they arrived where it had been parked that the front and rear passenger side tires had been slashed.

The other complication that arose as they tried to get the problem fixed so they could get on the road was that no one in McAlester would repair those tires.

You picket a local hero's funeral, don't expect much love or help coming your way when you get into trouble.

The Phelps Phamily had to call a AAA tow truck to take them to a nearby Walmart to repair those slashed tires but it could have been worse..

They're lucky whoever did it decided not to smash all the windows out on their vehicle, pour sugar in the gas tank, slash the driver side tires, or use their van for target practice with them inside of it.